In Emacs support of Mercurial implemented by several packages, providing different levels of support. In Mercurial's distribution exists package mercurial.el, that implement native support, and described in this document. Another package, implementing native support is aHg, and it also described here.

There is also support for Mercurial in the DVC & VC packages, each of that implements a common approach for different version control systems. These packages are described in corresponding sections of this article.

To install the package you need to copy the file mercurial.el from contrib directory in the Mercurial's distribution into place, where Emacs could find it, and put following command into Emacs's initialization file1:

Mercurial.el use almost same principles as the VC package (i need to mention, that VC also support work with Mercurial) and use almost same key bindings as VC does. mercurial.el — minor mode, that add some number of commands to perform base tasks with repository.

Some of commands also has global key bindings (by default this is C-c h, but it could be changed by user), and other commands available only inside buffer for which hg-mode is enabled. For some commands user can use prefix argument and this allow him to set additional parameters interactively. User can get help on commands and key bindings provided by mercurial.el with hg-help-overview (C-c h h) command.

Committing of changes is performed with hg-commit-start command, that has two key bindings: local — C-x v n, and global — C-c h c. During execution of this command mercurial.el creates a new buffer, in which user can enter commit message, that will written to log. In addition to user's commit message, in this buffer also displayed list of files for which changes will committed. By default commit will affect all files, but user can change this list by moving cursor to file and switch selection (shown as a bold face) with SPC or RET keys (or with middle mouse button). On the picture below you can see work with this buffer. 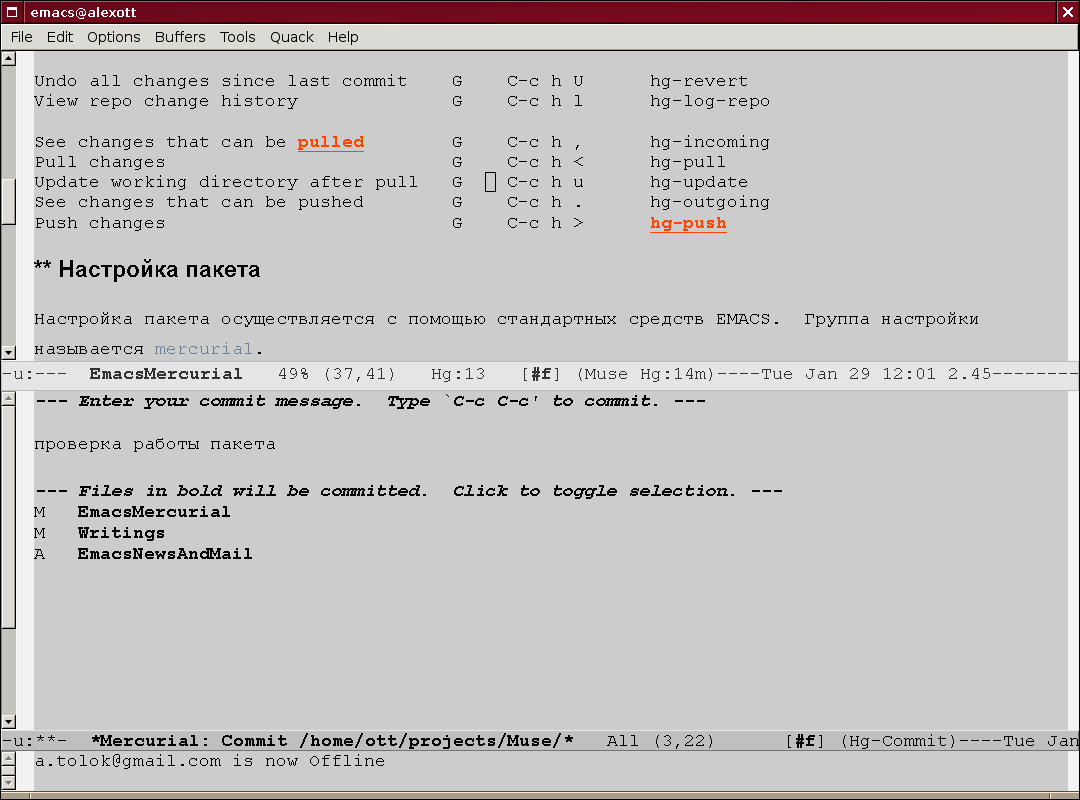 In buffer, created by hg-commit-start function, work special mode called hg-commit-mode. It use several special key bindings, that could be used by user. As in many other modes C-c C-c key binding is used to initiate commit operation using user's text as a commit message. The C-c C-k key binding aborts the commit process. And C-x v = could be used to view changes in this commit.

To revert made changes user can also use one of two commands: hg-revert-buffer (C-x v u) command cancel changes only for current file, and the hg-revert (C-c h U) command do this for all modified files in repository.

To add a new file to repository you can use hg-add (C-c h a) command. By default it add current file to repository, but if you give it prefix argument, then it will ask for name of file to add. And the hg-forget (C-c h f) command (it not implement) could be used to cancel addition of new file (if you hasn't committed it yet).

To view status of files in repository user can use the hg-status (C-c h s) command, but in distinction from other packages, it doesn't allowed to perform commands with retrieved data. To view history of changes for concrete file could be used the hg-log (C-x v l) command. To view change log for whole repository exists separate command called hg-log-repo (C-c h l). There is also the hg-annotate (C-x v a) command, that could be used to view annotated source code with version marks.

Back to main page

1. Latest version of mercurial.el you can download from repository, link to which you can find at Mercurial's page on Emacs WiKi.